Empowerment Coach for YOUR  life and Business

Meeting my Finnish Family for the First Time

I had emailed my cousin in Finland a few years ago out of the blue to introduce myself but to also ask a favour for a friend who was moving to Helsinki. In our brief dialogue years ago, he offered a generous invitation to come meet him and his family in Vaasa, Finland. I’m so glad that that email acted as a catalyst to fly to Finland to meet my family for the first time, finally.

There was a natural comfort level from the get go. Upon finally meeting my ‘cousin’ Bjorn in person (my grandmother’s nephew) at the Vaasa airport, with a welcoming hug, this incredible journey had begun.

While we were starting the inaugural ‘getting to know one another’ moments with Bjorn, his wife and youngest daughter at their lovely home, a ‘proper heritage verification test’ was ignited. Test one: Salmiakki (a few variations!). Real, salty black liquorice. Nothing like anything I have ever tasted. I think it’s a love or hate kind of treat but I liked it! Growing up, my dad had an assorted black liquorice stash in his armoire and I could never figure out why. He was appeasing his Finnish sensitivity of course! Sorry to out you Dad (oh and for snooping!) Anyways, we also tried some Karl Frazer Chocolate! A popular Finnish brand! Yum!  A similar test came with trying ‘Salmiakki Koskenkorva’, (a vodka drink). It could be somewhat compared to Sambuca yet grey-black in colour due to the liquorice.

My first full day in Finland was about meeting family from my Grandfather’s side in the Maxmo area, in the countryside. Having never met my grandfather, spending the day with my grandfather’s niece (and her husband), her brother, and her nephew gave me a compelling and a baptism-by-fire glimpse into my heritage. We visited where my grandfather lived and went to school and the cemetery where some of my grandfather’s siblings are laid to rest.
I stood near the apple tree he planted and I quickly realized that I was standing in the one of the quietest places that I have ever visited. This property anchors the home where my grandfather and his family lived. No electrical hum or buzz, yet (nature) energy swirling about. There were these beautiful butterflies resting on the grass, and one robust dragonfly zooming about. In a moment, while loudly gesturing with my arms (apparently I do this when I talk), the dragonfly slammed hard into my fingers before landing on the keyhole of one of the sheds. I got the sense that this particular dragonfly was my grandfather saying ‘hello’. 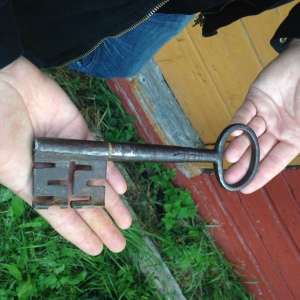 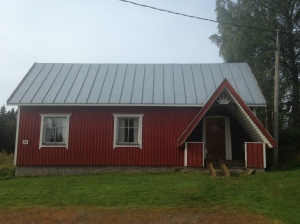 Where my grandfather attended school

Finishing this portion of the visit, it was time to meet more family. A lovely table was prepared where coffee and treats awaited my arrival. Meeting another niece, and great-nieces, I was shown a gift my grandmother had given one of them when she visited in the 60s’. Very sweet that she still had it!

As the day was coming to an end, Bjorn and I headed out to this beautiful Unesco site to catch the quickly changing sky. As we drove, the sky was changing from gnarly waves of purple to these intense fluorescent pink shades. (featured photo above)

The overtaking clear black sky was a sign to head back. Another Finnish test awaited me at the house. This time, Finnish beer! It was a right of passage. I tried three brands: Lapin Kulta, Karhu and a ‘girlie’ drink called “Cool Grape”, the latter a perfect summer drink.

Allow me to talk a little about coffee, here. The Scandinavian culture includes a wild coffee culture, and Finland could certainly take the crown for coffee drinkers in general. Check out this article: Maxed Out: A Closer Look at Coffee Consumption in Finland.

Being half Italian and Finland-Swede, I never stood a chance where tea is concerned. I kept having flashbacks about visiting my grandmother when I was child. She used to make delicious smelling coffee in this white ceramic percolator with a blue flower on the side. The aroma permeated her apartment. I was coffee-frenzied even at the young age of 10 years old! I am an old soul however 🙂 That, along with her famous, and greatly-missed Mama’s pulla (quick recipe here!) – heaven!!

The next couple of days included individual visits with my ‘cousins.’ Whether drinking Chai tea lattes in the square soaking up the sun, having lovely lunches at the vocational school, and on the deck at ‘Strampen‘…. 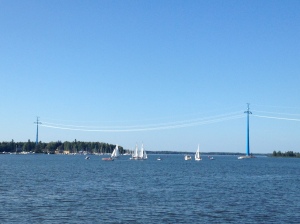 …these special moments led up to the season opener for the Vaasan Sport Hockey team! 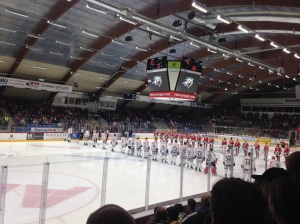 The arena was bustling with that ‘hockey energy’ that I have missed a lot, I mean A LOT!
I’m in a different sports environment here in France. When in a hockey country such as Canada or Finland, the energy and the intensity are palpable and exciting. I wasn’t familiar with either team playing that night, but naturally, I was rooting for the ‘home’ Vaasan team, “Hockey Team Sport” against JYP.
Spotlight:  JYP’s team has a training and transfer program with the Boston Bruins. Hockey Team Sport “Vaasan Sport” has Charles Bertrand, a French ‘superstar’ hockey player. He was recently at the training camp with the New York Islanders.

Strong players on both sides, the home team with Charles Bertrand (aka. King Charles, they call him) tore it up leaving fans happy and energized for the season. The other team boasted two Canadians, way more aggressive than the rest. It must be a cultural thing, I shook my head.
Meanwhile during 1st intermission, I met my cousin’s son who was cheering in the famous ‘Red Army’ section. It is this dense and dedicated crowd who cheer for the entire game. They were drumming and jumping, cheering and chanting, all in red and white, reminding me greatly of my home country.
The second intermission was presented with another Finnish test, a classic intermission snack, the makkara sausage with mild mustard. Yup, passed another test with flying colours! I thoroughly enjoyed it except with my dijon-trained taste buds, I anticipated those tears spicy mustard can cause, but this had a lovely delicate smooth taste – I had to re-adjust! Upon leaving the arena, aside from the home team winning, I felt like I was on a hockey-cloud-nine. I hadn’t realized how much I missed watching NHL games, even if in the background while multitasking.

My last full day was dedicated to grandma’s side, visiting the town where she was from: Jeppo. 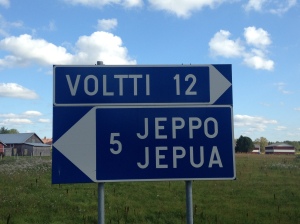 I saw where my great-grandfather worked, and one of the houses where they lived. We were in search of another house but we were told that it had been relocated as per a kind neighbour some-what familiar with my grandmother’s side. My grandmother was an orphan at the age of two and when she was finally old enough, she took the leap and left for Canada, the West Coast of Canada no less. She came back to Finland only once after she had immigrated, and she came with my dad who was a sprite at the time taking off for long bike rides not telling anyone where he was going! He caused quite the panic. Bjorn and his wife thought it a cool idea to re-trace the road my dad took so independently back in the 60s. I was happy in the car 🙂

Photo below: This is the train station (no longer in service) where my grandmother and my dad would have arrived when they visited in 1966.

Soon we were on our way to the seaside cabin where we spent a little time chatting, eating and watching Emma Kimilainen  drive her wicked pink car in a very exciting televised race.

We also took some selfies with the sea as our background and admired the dozen or so local peacock butterflies that hovered around the house. Ode to the ancestors!

Once the salmon was bbq’d and potatoes were dug up for dinner later that night, we headed back. En route, we stopped in Nykarleby where my cousin Bjorn and his wife met and the lovely yellow church across the river where they got married.

One of my favourite photos from this visit in Nykarleby!

As it was my last night in Vaasa, Spanish wine kept us company as we chatted away and watched almost two episodes of “How the West was won” until the wee-hours of the morning.

The next day Bjorn and I would adventure off to Turku to visit his mother and sister on route to Helsinki. During our coffee/snack break, I had my last Finnish test: karelian pie and coffee. I was kind of sad to have these heritage legitamize-rs end. A fond memory indeed!

We spent the day in the car, getting from Vaasa to Turku to Helsinki. We had a long-standing joke about whether or not I would see a moose before leaving Finland, losing count of the number moose-caution signs along the highway.
I had a lovely yet quick visit, coffee, and treats with his mother and sister while looking at old family photos that my grandmother had sent them over the years, years back. There were a few with me in them! Wow!

A couple of hours later we arrived in Helsinki for my last sleep in Finland. It was time to say goodbye to this whirlwind of family loveliness, warmth, and welcome. I felt at home, and at ease with my new, yet not so new anymore, family in Finland. I feel so lucky to have met these really lovely people I am so fortunate to call family. I am looking forward to visiting them again soon.

My final moments in Finland were spent in Helsinki wondering around, taking my time at one of my favorite new stores in Finland, Iittala. My aunt has some of the collection that I love so much – I felt a twinge of homesickness. My other favorite place was at the market place, taking in the full of Scandinavian artisanal experience and great smelling food!!

I left Finland with a perma-smile on my face completely in awe of all that had transpired. In the final few minutes before descending into Paris, the Eiffel tower was to my right, and I couldn’t help but smile. Once off the plane, this gorgeous rainbow greeted me, and I thought, what a magical end to a magical trip!

The Content is not intended to be a substitute for professional medical advice, diagnosis, or treatment. Always seek your physician’s advice or other qualified health providers with any questions regarding a medical condition.

Offering a free 30-minute
compatibility call
AND A LITTLE SUPPORT TOO.
contact@allisonlund.com